skip to main | skip to sidebar

As we get ready to begin a $1.5 million restoration to our facade, I have been asked for archival information about our building. It has such a rich and colorful history. Our building, at 62 East 4th Street was built as a social hall in 1889. It hosted meetings by John Philip Sousa as he established the first musicians union in NYC as well as the early ILGWU (International Ladies Garment Workers Union) organizational meetings. East 4th Street was at the center of social activism at the turn of the century.

In the 1930's, the ballroom where these meetings were held was converted into a theater which continues in operation. A stage and proscenium were added, the murals from the original construction remained. It was used by many Yiddish theater companies of the time, it housed a television studio where many early TV shows were filmed.

The co-manager was poet Jim Carroll who also took tickets. Joe Dallesandro worked as projectionist for several weeks, replacing his brother who had been committed to Bellevue mental hospital. According to Jim Carroll, Joe Dallesandro was also secretly making a bit of extra money by taking clients into "a small sofa-filled room beside the projection booth" and having sex with them. (from warholsuperstars.org) 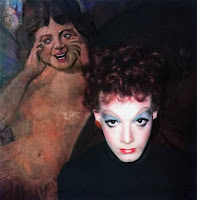 In the midst of one of these productions, Francis Ford Coppola rented the theater and shot the famous operetta scene from Godfather 2.

To be continued....
Posted by DUO Multicultural Arts Center at 9:40 AM